Short of depth at centre-back, it appears AS Monaco are looking around Europe for a player capable of providing competition for both Kamil Glik and Jemerson.

The pair have been ever-present this season (suspensions aside), and La Gazette des Transferts reckon the Ligue 1 side are looking at Eliaquim Mangala to help them out for the second half of the campaign.

Warming the bench on a regular basis with Manchester City at the Etihad, the France international is said to still be (even if it a very slim hope) thinking about the World Cup in Russia and wants to play regularly. 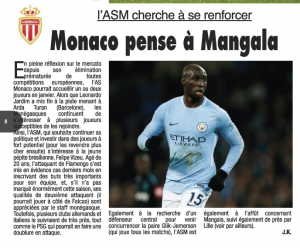 Already pushed to one side by Pep Guardiola last season, Mangala has only been used as an emergency option during spells when either John Stones and Nicolas Otamendi were forced away from the team with injuries.

With the Spaniard determined to bring in more defensive reinforcements for the remainder of the season, the 26-year-old could see himself pushed even further down the pecking order.

Whether it’s to Monaco or somewhere else, everyone seems to agree Mangala needs to get a move away from the north of England, and, as destinations go, the south of France isn’t awful.