Diego López had three different spells with Real Madrid and two of them were with their first team.

The goalkeeper’s last spell with Los Blancos started in January 2013, when current Tottenham Hotspur manager José Mourinho was in charge of the La Liga winners.

Real Madrid were forced to bring in a new keeper following an injury setback to Iker Casillas, who was then the first-choice goalkeeper at the Santiago Bernabéu.

Casillas and the Spurs manager famously clashed at the Spanish capital club, and Mourinho picked López ahead of his compatriot in his final months with the 13-time European champions.

López went on to make 16 appearances for Real Madrid in the second half of the 2012/13 season.

The Espanyol custodian has told AS how he was able to handle pressure during his career, which also helped him to manage himself, during the fallout between Casillas and Mourinho.

“I signed for Madrid at 18 and my disadvantage was tremendous compared to the rest of the players of my generation. I arrived without any training and had to work not two or three times, but more. It helped me to assimilate the values ​​of Real Madrid, which I have taken into my personal life,” he said. 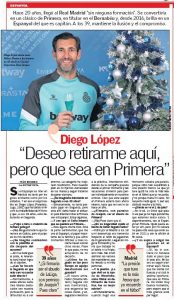 On being given an opportunity by the current Tottenham boss at Real Madrid, López said: “Fortunately, when that moment came, I was ready, because others have succumbed to less pressure.”

“The one [pressure] I had was perhaps the heaviest in football that I remember, and not because it was my case. I don’t remember anything like it. And still, I really enjoyed it and was happy.”