At this point we’re close to convinced Tuttosport have an obligation to run at least one Paul Pogba article every single day.

That if they don’t, something terrible will happen, some kind of transfer reporting armageddon.

On Thursday the Turin newspaper go with a headline reading: ‘Pogba: Exit strategy’

They kick the article off by saying ‘open war to cold war’ to describe the situation between the midfielder and Jose Mourinho right now.

Despite being left out of the starting line up to face Young Boys this week, it’s explained those around the player are sending out messages of calm. There’s no crisis situation.

Rather than it being complete peace, Tuttosport say it’s more like a ceasefire, which is allowing Mino Raiola to work away in the background, undisturbed by lighting and putting out fires every week.

Raiola is using this ‘tranquility’ to try and find a way Pogba can leave Manchester United that is ‘economically acceptable’ to the Premier League club. 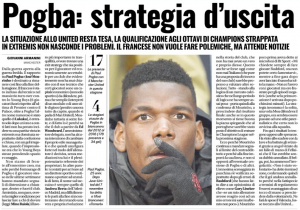 The World Cup winner is considered a marketing plus by Manchester United, with the suggestion that makes the club more reluctant to sell, so everything is going softly-softly.

There’s no mention whether Juventus are part of this plan.