Faced with a lot of spare time now that his contract with Paris Saint-Germain has come to an end, Hatem Ben Arfa has been hired by France Football to write a weekly column in their magazine.

This week’s edition focuses on full-backs following the promising performances of Lucas Hernandez and Benjamin Pavard at the World Cup, and the free agent had an interesting opinion about one of his former teammates.

According to him, Lucas Moura, who transferred from Paris Saint-Germain to Tottenham back in January, could become one of the best in the world if he decided to drop back a notch tactically.

Not only is he ‘completely serious’ about this, he’s ‘convinced’ that’s the case. 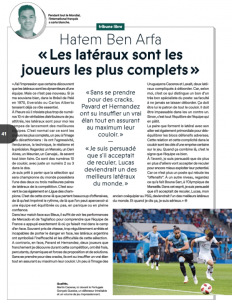 The idea here would be for the Spurs winger to follow in the footsteps of the increasing number of ‘success stories’ like Bouna Sarr last season at Marseille, Victor Moses at Chelsea and, to some extent depending on who you ask, Antonio Valencia at Manchester United.

His reasoning for this is ‘it isn’t a position that rejects “attacking” players’ any longer, believing it would allow many to ‘exploit their potential even more’.

Predicting more and more wingers will accept to do this in the future, Ben Arfa sees those who play there as ‘the most complete players’ on the pitch, like Thomas Meunier or Marcelo, described as ‘number 10 wingers with a numbers two or three on their back’.

With Kieran Tripper and Serge Aurier at Mauricio Pochettino’s disposal at Tottenham, it seems unlikely that we’ll see Lucas Moura become a full-back/wing-back anytime soon, but you never know.

A few injuries here and there next season, and the Argentinian might be forced to consider Hatem Ben Arfa’s advice…