Fitting snuggly in, O Jogo report a Manchester United official was spotted watching Benifca beat Estoril 2-1 last night. Victor Lindelof is of course stated as the main reason for the representative being in Lisbon, with Nelson Semedo a side agenda.

Lindelof had a reasonable game, not as good as his cracker the week before, but Manchester United will know that, given they watched that game too. 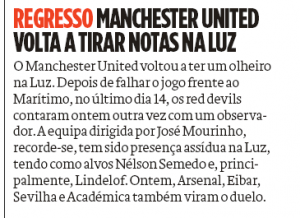 Jose Mourinho is currently going through a plague on his central defenders and may well regret not pushing a move for Lindelof through in January.

Manchester United were very strongly linked from December into the winter transfer window, but nothing came of it in the end.

Given all the claims of a done deal last time around, it’s going to be hard to believe things ahead of the summer. But one thing is for certain, Manchester United have made themselves absolute experts on what Benfica have to offer.