Sabah report Fenerbahce have made a loan offer with an obligation to sign Xherdan Shaqiri but Liverpool have yet to respond, as they are looking to get around €7m from the sale of the player.

The Swiss winger started just five Premier League games for Jurgen Klopp’s side last season and according to the Turkish newspaper, he wants to leave the Premier League.

In fact, it’s stated that Shaqiri has gone as far as reportedly telling his agent to find him a new club for next season.

Earlier this week we covered reports from the Turkish press stating the Süper Lig club had made contact with his agent Erdin Shaqiri, as they look to loan the player for next season. 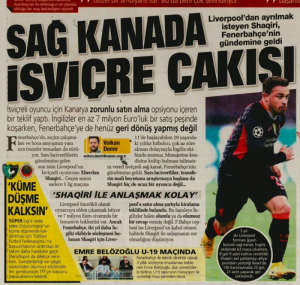 According to Sabah, Liverpool will not stand in Shaqiri’s way if they get the right offer, and Fenerbahce believe once they reach an agreement with the Reds, it will be easy to convince the 29-year-old to move to Istanbul.

Shaqiri’s contract with Liverpool will expire at the end of June 2022, with the player scoring eight goals and assisting another nine in 68 appearances since his £13.2m move from Stoke in 2018.