The Swiss international had previously been linked with Galatasaray, and Fotomac today claim their arch-rivals Fenerbahce are now in the picture for him.

It’s reported the 29 year old is looking to leave Liverpool to get regular game time, and that the Premier League side are also fine to part ways with him. Fotomac add Liverpool would consider letting Shaqiri leave on a loan deal, which makes the this transfer more likely. 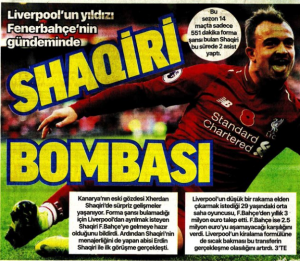 Shaqiri is said to be looking to get around €3m a season and Fotomac say Fener can offer €2.5m to the former Stoke City player.

It’s claimed the Yellow Canaries have already made contact with the player’s agent over a possible move.

Shaqiri made 22 appearances for Jurgen Klopp’s side in all competitions this season, scoring one goal and providing four assists.

His contract at Anfield will only expire at the end of June 2023, but his future on Mersyside looks uncertain.