N’Golo Kanté’s former image rights agent Nouari Khiari has responded to claims made against him about his relationship with the Chelsea midfielder.

Back in November, we covered a report from L’Equipe that explained how the Chelsea and France star had filed a complaint against his former agent citing fraud, attempted fraud and breach of trust among his crimes.

It was explained that after signing a deal with Kanté back in 2016, a divide quickly opened up between the pair when Khiari started to propose deals the Frenchman wasn’t comfortable with.

The Chelsea man had made it clear he wanted to terminate the relationship and paid money to make that happen before Khiari is alleged to have demanded more, hence the legal proceedings.

There was also talk of Khiari trying to interfere in Kanté’s career, namely engineering a move from Chelsea to Real Madrid.

All in all, it’s a pretty ugly affair, but now Khiari has sat down for an interview with L’Equipe in response to the claims.

“I am accused of never having really worked for N’Golo Kanté (but) we signed a contract on 21st July 2016, after having hashed out all the details, over 7 hours, in the presence of one of his brothers,” he told the newspaper.

“Upon signing, I rapidly made contact with the Arthritis Foundation, who promotes research to cure the most grave illnesses.

“For me, the values that N’Golo Kanté embodies, work, humility, self-sacrifice and engagement correspond well with the values that this foundation promotes. The people in charge over there showed their interest in a partnership immediately.

“Each year, the foundation organises a big gala, with close to 300 invitees. In 2016, during the first year in which they collaborated, N’Golo Kanté took photos with the guests and stayed for several hours.

“In 2017, he declined the invitation two weeks before the event, and in 2018, he cancelled just two hours before, claiming that he needed to be in London to recuperate.” 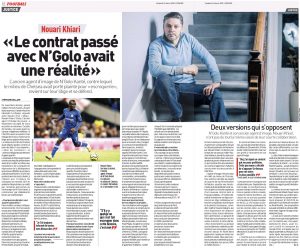 A large part of the complaint against Khiari was that he had proposed agreements for Kanté that the midfielder did not feel fitted his image.

One of these was with a gambling company, which would not have fit well with the clean, saintly image that the Frenchman is known for.

Khiari denies this, though, and instead insists that he had only tried to get the Chelsea star to sign up with a company warning against the perils of gambling.

“He claimed that I brought him an offer from a betting company,” he added.

“To be clear, it was an offer from “la Française des Jeux” for a campaign that warns of the perils of betting and discourages people from doing so, not promoting it!

“There were also approaches from a big automobile company. Kanté never responded to me. I also had contacts with a member of the Qatari royal family who wanted to use N’Golo’s image to promote a local orange juice company.

“We were due to travel to the country together, but he (Kanté) never followed it up. I want to add that I always informed him of everything I was doing.”