If there’s one thing we know about N’Golo Kanté, it’s that he’s a nice guy.

Barely a day goes by in which the Chelsea midfielder does something or says something that makes you like him even more.

It’s an image that Kanté wants to protect at all costs, and that desire has led him into a court case against the man whose job it once was to deal with his image rights.

L’Equipe explain the Chelsea midfielder has filed a complaint against his image agent, Nouari Khiari, citing ‘fraud’, ‘attempted fraud’, ‘breach of trust’ and ‘illegal exercise of the profession of sports agent’.

Khiari, who was introduced to Kanté through friends and family, started working as the player’s image rights agent back in 2016.

However, a divide quickly opened up between the 52-year-old and the Chelsea midfielder, when said agent started to propose agreements, such as one with a betting company, that Kanté felt didn’t fit his image.

After ‘the first tensions’ the Chelsea player made it clear he wanted to terminate their relationship in July 2017 and agreed to pay €150,000 to make this happen. That was paid in two instalments, one in August 2017 and then December 2017.

However, according to the claims, the agent took this money, kept all the copies of the agreement and then pressured the Chelsea man for more.

The two parties met, and Kanté offered an addition €150,000, then €300,000 to put an end to the issue. The first offer was refused and the second, which was made through Kanté’s ‘sports advisor’ Abdelkarim Douis, was ignored.

There’s more to the story, though. Alongside this financial dispute, Kanté is also keen to ‘distance himself’ from Khiari as he’s even tried to interfere in his playing career.

In particular, Khiari tried to arrange a deal to take the Chelsea star to Real Madrid in 2018, and this led to a ‘dispute’ with agent Douis. 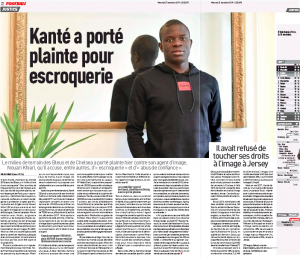 When asked about these by L’Equipe, Khiari set ‘preconditions’ to speak to the newspaper, which they refused.

So far the whole affair has not affected Kanté’s performances on the pitch, but it is said to have his entourage ‘shaking’ behind the scenes, and the worry is, now that there is a court case to deal with, that could change.