The Senegalese striker has returned to Gala after his loan spell at Club Brugge ended, and he could be on the move again, with Nottingham Forest said to still be interested in his services.

Sozcu claim Nottingham Forest are his most serious admirers, and the Championship club are ready to offer €7m to Galatasaray, which the Turkish club would gladly take it.

Gala are looking to part ways with the 28 year old and along with Nottingham Forest, fellow Championship club Leeds United are also interested in his signature. 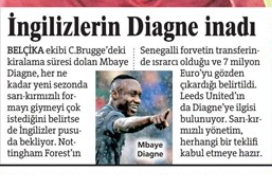 However, it’s reported Leeds United aren’t so keen on the player at the moment, and they only see him as an alternative to other targets.

The Elland Road club have been linked with Besiktas forward Cyle Larin in recent weeks.

Diagne only managed to make nine appearances for Club Brugge in all competitions during his loan spell, following disagreements with their manager Philippe Clement.

His contract with Galatasaray will expire at the end of June 2023.