Turkish newspaper Sozcu report Aston Villa could make an offer for Galatasaray defender Christian Luyindama if they manage to stay in the Premier League for next season.

Dean Smith’s side are currently in the relegation zone ahead of the restart and if they manage to maintain their top flight status, they will reportedly look to strengthen their defence.

Sozcu claim Villa are ready to offer €15m to sign the DR Congo international, and Galatasaray would happily accept that. Aston Villa were also linked with the player last year before he picked up a serious injury.

The former Standard Liege defender was injured in November whilst playing for his country and only recently returned to training with the first team. However, he won’t be able to feature in the remaining league matches because he’s not registered. 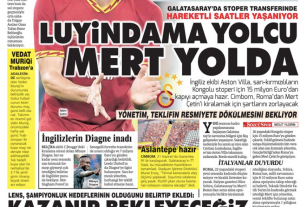 It’s also reported Gala will look to replace the 26 year old if he leaves this summer, with AS Roma defender Mert Cetin said to be on their shortlist.

Luyindama’s contract with Galatasaray will expire at the end of June 2022.