Over the course of the last transfer window, it was reported a few times that Manchester United were in talks to sign Benoît Badiashile from AS Monaco.

It was even suggested the young defender was in the middle of a tug of war between Bayer Leverkusen and the Red Devils, but Niko Kovać, newly appointed, made it clear he counted on the centre-back and wanted him around for the current season.

An offer of €25m was allegedly rejected by the club from Manchester United after the manager’s desires were accepted by the Monaco board, and the 49-year-old has made the 19-year-old the cornerstone of his defence, starting him every single game.

He’s started eight games, and scored two goals, and while the principality side have done relatively well, they aren’t the dominant force they used to be.

That was put on display this weekend when they travelled to Lyon, who pummelled them 4-1, and Badiashile was at the heart of all the issues. 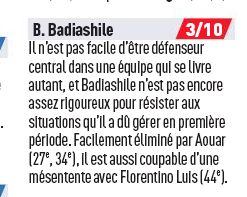 L’Equipe gave him a 3/10, explaining ‘it’s not easy being a centre-back when the team drives forward so much, and Badiashile isn’t rigorous enough to stand up to the situations he had to deal with in the first half’.

The youngster was ‘easily dribbled past by Aouar twice and was also guilty of a misunderstanding with Florentino Luis’.

With Manchester United needing an experienced first-team player to step into the centre-back role, perhaps they potentially dodged a bullet here this time around.

Only time will tell, but perhaps waiting an extra year for him to learn from these mistakes and making their move next summer could be wiser from Ed Woodward and co.