While Ibrahima Diallo may not have made a huge impact on Southampton just yet, the Saints summer recruit’s absence is being felt at his former club, Stade Brestois.

Bought for a relatively cheap €15m, the defensive midfielder was the anchor of the Ligue 1 club last season and was key to their ability to comfortably remain in France’s top-tier.

Since he left, the club have lost 3-1 to Nantes and 3-0 at home to Strasbourg, which, paired with the fact Brest never bought anyone in to fill the void, is forcing their manager to rethink his plans.

That’s what Ouest-France are reporting on Monday, explaining they ‘lost their balance since Ibrahima Diallo’s exit at the end of the transfer window, who wasn’t urgently replaced’. 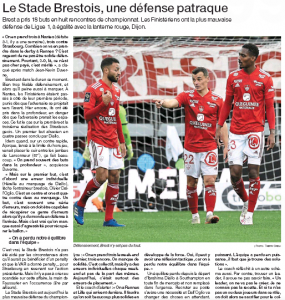 It’s clear ‘recruiting in the role is a necessity’ and Olivier Dall’Oglio, the manager, will ‘have to change things while waiting’.

The 56-year-old said so himself: “Ibra[hima Diallo] brought us power and reassured the defence. We’re also missing [Ronaël] Pierre-Gabriel, who’s powerful. The team has lost power. I need to find solutions”.

That’s good news for Southampton fans, who will be keen to see what Diallo can do throughout a full game once Ralph Hasenhüttl deems him ready to start.

If he had that much impact at Brest, think of what he could do at St Mary’s.