Norwich City are now top of the Championship.

Level on points with Marcelo Bielsa’s Leeds United, they’re top thanks to having a slightly better goal difference.

The 3-1 victory at Elland Road was significant, if Leeds had won then they would have been six points ahead and looking to have something of a cushion.

With Sheffield United only three points behind, and West Brom and Middlesbrough having a game in hand, the end of the Championship season promises to be exciting.

Krul has been speaking to De Telegraaf about his current situation, and they pointed out Leeds fans were annoyed with him for taking time over goal-kicks, to which he responded: “It was nice, wasn’t it?”

The Dutchman relishes the hostile environment, given he’s spent so long struggling to get back to a good level. The ‘fanatical’ Leeds fans certainly made an atmosphere which he won’t forget, even if he’s explained there were objects thrown towards him. 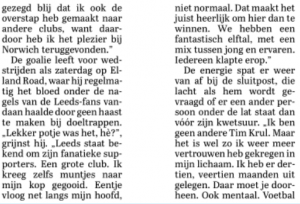 “Leeds is known for its fanatical supporters,” Kruls told the Dutch newspaper. “A big club. I even got coins to my head. One just flew past my head, not normal.”

Not that he’s overly bothered, it just makes coming away from Elland Road win a win all the sweeter: “That makes it wonderful to win here.”