A year after Chelsea signed Tiémoué Bakayoko from AS Monaco, the Blues allowed the midfielder to join AC Milan on loan last summer.

As a part of the deal, the Serie A outfit will have an option to make the Frenchman’s transfer permanent at the end of the season.

The 24-year-old struggled during his first few months at the San Siro and waited until the end of October to make his first start for Gennaro Gattuso’s side.

Now that things are going well for Bakayoko, the former Ligue 1 midfielder has admitted that he would be open to the idea of extending his stay at Milan for a long time.

“We are talking about a club like Milan … Who would not like to join them for the long term?” he told Nice-Matin.

However, Bakayoko still has more than three years left on his contract with his parent club, Chelsea, meaning his desire to continue at Milan beyond his loan spell is out of his hands.

“But I’m under contract for another three years with Chelsea and I do not control all elements,” Bakayoko stressed.

Should Chelsea and Milan agree for Bakayoko’s permanent transfer, he should have no trouble adjusting in Italy.

“It is a very pleasant city, where you can relax very easily. I am someone who stays at home so it is a perfect cocoon. It suits me very well,” the current Milan midfielder added. 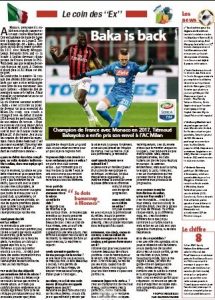 “And I really like fashion, so I enjoy Milan, I’ve done my wardrobe somehow (laughs). It’s a perfect place to flourish. I still have a little trouble expressing myself in Italian, but I understand it rather well.”