Home Championship “Did not go as desired” – Player explains how changes at Hull...
SHARE

After struggling to impress for Dynamo Kyiv, Dieumerci Mbokani was loaned to Norwich City in 2015 and a year later, the striker was allowed to join Hull City on a temporary deal during the 2016/17 season.

That campaign was a disaster for the Tigers as they had three managers over the course of the season and were relegated from the Premier League after finishing 18th in the table.

During his time at the KCOM Stadium, the DR Congo international struggled with injuries and made only 12 appearances in the league, while the club also had three managers – Steve Bruce, Mike Phelan and Marco Silva during the course of the season.

The 32-year-old, who joined Royal Antwerp earlier in the summer, sat down for an interview with Belgian newspaper Het Nieuwsblad and was asked why he has failed to impress outside a club in Belgium.

“I do not agree with that, but I have made seven goals at Norwich in the Premier League and my first year at Kiev was good. But then we are talking about two seasons,” Mbokani explained.

“I had a good start at Hull, but after the African Cup of Nations, there was a new coach who did not know me and therefore [things] did not go as desired.” 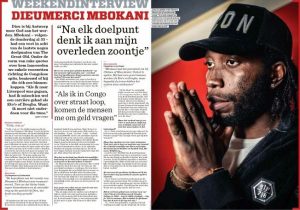 He has managed to get his form back at Antwerp as the frontman has scored three goals and registered six assists in nine league appearances.