Earlier this month, Mundo Deportivo journalist Miguel Rico reported there is belief at Barcelona that Frenkie de Jong of Ajax only wants to join the Blaugrana despite interest from elsewhere.

The front page of today’s edition of the same publication now claims the 21-year-old is a ‘priority’ target for Ernesto Valverde’s side next summer as they are working with the ‘firm idea’ of sealing a deal for the Netherlands international.

The sporting leaders and other top leaders at Camp Nou are in consensus over making an approach for the Dutchman and the La Liga winners view his signing as a ‘strategic reinforcement’ for various reasons.

Barcelona have been monitoring the Eredivisie star’s progress from his time in the Ajax academy and this, coupled with his quality, ability to play in the midfield and defence and fine form has seen him become one of the most followed players in Europe.

The Spanish champions are aware that they have to spend big because De Jong will cost at least €70m and there are other clubs interested in him, which is why the Catalan club will be hoping to secure his transfer in January in order to avoid further competition at the end of the season. 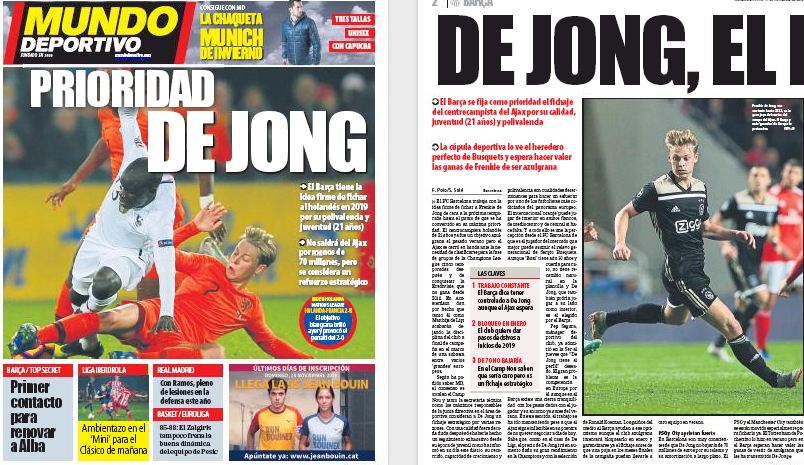 Another ‘Top Secret’ report from Mundo also suggests the midfielder keeps a track of what’s written about him in the Spanish press and wants to be prepared in every way possible to make the jump to Barca next summer.

His environment are cautious about not revealing any information regarding De Jong in order to create any complications, which is why they prefer to remain silent.

The European giants are in contact with the Amsterdam-based side and it is down to the two clubs now to reach an agreement for the transfer. 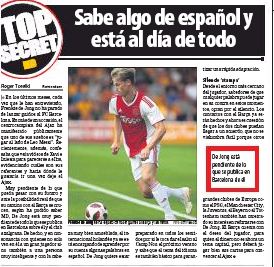 It would be interesting to see who will be successful in securing his services for next season.