After being promoted to the Premier League, Norwich City made several additions to their squad.

Ralf Fährmann was one of the players arriving at Carrow Road as the goalkeeper signed for the Canaries on a season-long loan deal from Scahlke.

Fährmann made his debut for the English side in their 1-0 defeat to Crawley Town in the second round of the EFL Cup, and then went on to make his Premier League debut a month later against Crystal Palace. An injury restricted him to only 22 minutes on the pitch.

Since then, the 31-year-old has not featured for Daniel Farke’s side, and is instead planning his future.

According to Sport Bild, Fährmann will be included in Schalke’s plans for next season and is expected to take Alexander Nübel’s place in the squad. The latter will move to Bayern Munich after this season. 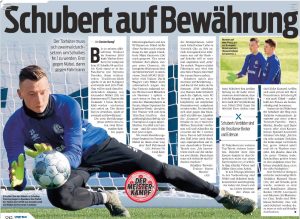 It’s claimed Fährmann ‘wants to attack’ the number one spot at Schalke next season and give it everything he has to beat Markus Schubert to the role.

The report also adds the Bundesliga club’s manager, David Wagner, will give Fährmann  a fair chance to challenge for a place in the starting XI, once he returns from his loan spell at Norwich City.