Chelsea’s Callum Hudson-Odoi made 10 appearances in the league last season and nine of them came in 2019.

Despite him only making a small number of appearances in the first team, Bayern Munich were keen on acquiring the winger’s services. However, despite their confidence, no deal took shape as they failed to agree a transfer with the Europa League winners.

Frank Lampard gave opportunities to Chelsea academy graduates after his side were handed a summer transfer ban. Sport Bild have interviewed Antonio Rüdiger, and he discussed how the transfer ban has resulted in more opportunities for youngsters.

Naturally, the German magazine also asked about Hudson-Odoi and his failed move to Bayern Munich. Responding to that, Rüdiger said, “I am very happy that Callum stayed with us because we are both very good friends.”

“Of course, he also asked me about Bayern at that time. I told him it’s a great club. It is only logical for me that he chose Chelsea.

“The transfer ban and the departure of Eden Hazard, which had been expected for a long time, have shown that Callum will get more opportunities.”

The 19-year-old suffered a serious injury in April, which forced him to spend several months on the sidelines. 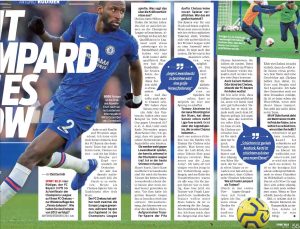 Just days before returning in September, the England international committed his future to the Blues by signing a new five-year deal.

Hudson-Odoi has started in only three league fixtures this term, and made 10 appearances from the bench. He is yet to open the scoring, but has three assists to his name in the Premier League.

Bayern Munich have been forced to look at other options.