The Portuguese sports media is today filled with stories saying Liverpool are now the main contenders for the signing of FC Porto star Luis Diaz, but that doesn’t mean the Reds are the only club in the race.

The winger has been showing big potential both for Colombia and the Dragons, and that seems to be attracting interest from several sides. What we get to see in a story from Record now is that Newcastle United are one of them.

The newspaper writes that the ‘newly millionaire’ Magpies have ‘joined the race’ for the 24-year-old, who was Copa America’s joint top scorer, along with Lionel Messi, last summer.

It’s claimed that those who know Diaz well have the ‘full conviction that the Premier League is the ideal stage’ for his to fulfil his potential, since he’s well known for his speed with the ball. 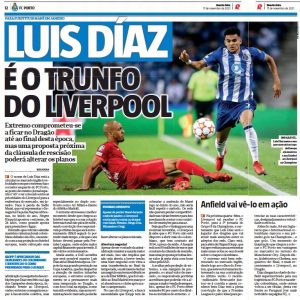 What Newcastle United should already know is that it won’t be easy to sign Diaz from Porto, especially in the January window.

The Dragons expect the winger to be their biggest sale ever, and at least for now, they’ll demand €80m to let him go, which is the price of his release clause.

Record says Porto could even line up a deal now and only let Diaz go in the summer, since their priority is to keep the player to fight for the league title this season.

The Colombian himself is said to be fine with staying at the club for a few more months.