Manchester United decided against paying €40m demanded by Atlético Madrid for Kieran Trippier in the summer, but ‘Newcastle United will do it’, reported Marca on Thursday.

It was also explained the Tyneside club are ‘preparing an offer’ for the ex-Burnley man, who has already expressed his desire to return to the Premier League.

Friday’s edition of Mundo Deportivo also discuss the Magpies’ interest in the right-back.

It’s claimed the La Liga winners been been contemplating for weeks, of bolstering their defence in the winter market. Injuries to some of their defensive players have made Los Rojiblancos determined to strengthen next month.

There must be departures before new faces are brought in to the Metropolitano. Mundo 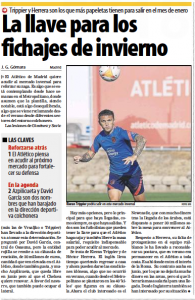 say there are ‘two key players’ who can help Diego Simeone’s side to ‘make money’ and they are the England international and Héctor Herrera.

Trippier has been wanting to return to his home country and now, the ‘ideal conditions can arise’ because Eddie Howe’s side are the ‘interested club’ to acquire his services. In order to convince Atlético, the newspaper explains Newcastle are ‘willing to put’ an offer of €30m on the table.

With these conditions, it’ll be interesting to see how the Trippier case develops in the coming weeks.