Arsenal are ‘willing to sell’ Pierre Emerick Aubameyang in January, with Juventus putting him on a list of three possible options.

That’s according to Gazzetta Dello Sport, who say the Italian side are determined to improve their forward options in January and have Aubameyang among their potential targets.

They explain that Juventus are ‘chasing a centre forward’ next month and are currently playing a ‘three card game’ in their efforts to find one.

Arsenal’s Aubameyang is one card, Manchester United’s Anthony Martial is another, and the third is Sassuolo forward Gianluca Scamacca.

The latter is currently the favourite after being targeted in the summer before Moise Kean’s return from Everton, but that does not mean the other two have been ruled out.

That’s because Sassuolo may prove difficult to deal with, particularly when it comes to losing their prized asset, while Arsenal are ‘willing to sell’ Aubameyang in January. In fact, they are even willing to sanction a loan deal to get rid of him. 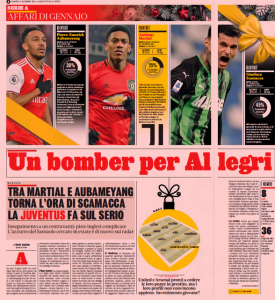 The problem is that Juventus are not completely sold on the Gabonese strike and remain unconvinced he fits the ‘football curriculum’ at the club.

Specifically, they want a man who can offer more than just the ‘penalty area striker’ that they see Aubameyang as.

Thus, the Arsenal man’s name has been pushed down the list for the time being, but his name remains on the table should their efforts for Scamacca fall short.