Even though Newcastle United don’t seem to be in advanced talks for the signing of Ricardo Horta, the Magpies continue to be named in stories about him.

Newspaper A Bola today has a big report on the player, as they expect him to be Braga’s hero in the Europa League clash against Rangers, in a match which starts at 5pm today.

They say that with a win, the Portuguese side can keep on dreaming about a title, and Horta can have a place in the club’s history.

That’s when he’ll be ‘able to yield’ to the interest from either Newcastle United or Torino. If staying at the Portuguese side, all he can do is fight to be the club’s top scorer. 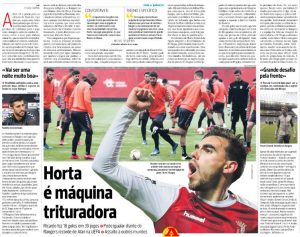 That’s all A Bola has to say for now, besides pointing out his great record this season, with with 18 goals and seven assists in 39 appearances so far.

Newcastle’s interest in Horta had been reported by newspaper Record this week, with the outlet saying the Magpies were ‘willing to shell out nearly €12m’ in January, but it wasn’t enough.

Now perhaps a great performance against Rangers would convince the Premier League side to spend more in the summer.