Although Newcastle United continue to be linked to Braga winger Ricardo Horta, there isn’t a big confidence that this transfer could succeed.

Portuguese newspaper A Bola is the one bringing an update on Braga’s situation today, and at the end of their story, they mention the Magpies’ chase for the player.

A Bola writes that Horta has Newcastle as the ‘main interested’ club in his signing, but the Portuguese side consider the amount offered to be too low.

Newcastle are said to be putting €11m on the table, and that shouldn’t be near enough to take Horta from Braga in the January transfer window. 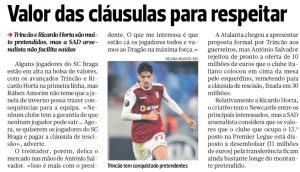 The newspaper doesn’t say how much Braga are demanding this time, but since Horta is protected by a release clause of €30m, the Portuguese press has been expecting something close to that in order for a deal to be found.

Ricardo Horta has 13 goals and six assists in 29 appearances for Braga this season.