It was claimed that the Magpies, who are looking for a left-back, would now be chasing both the Nigeria international as well as Benfica’s Alex Grimaldo.

Now it turns out that it’s also from the Portuguese media that we see a little bit of a denial about this rumour.

Newspaper O Jogo features a very short story to claim that there’s been ‘no direct approach’ to the player for now, pointing out that he’s been busy featuring in the Africa Cup of Nations this month. 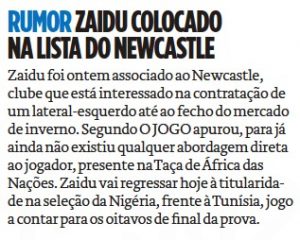 Zaidu has 19 appearances for Porto this season, including starts in their tough challenges in the Champions League, where they faced the likes of Atletico Madrid, Liverpool and AC Milan.

Although he’s currently valued by Transfermarkt at €6m, that first story from Jornal de Notícias claimed Newcastle actually consider him to be worth €20m.