We spend all afternoon waiting for some fresh transfer claims and then at 5pm, just as the day is starting to wind to a close, France Football come and drop about 20 on us.

In Newcastle United’s case, it’s reported they’re keen on signing Jeff Reine-Adélaïde, who left Arsenal for Angers initially on loan in January 2018. That deal was made permanent in the summer, and France Football say the player cost €1.5m.

Since then the 20 year old has been getting plenty of games, mainly on the right side of Angers’ attack. 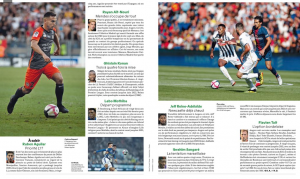 It’s claimed that Newcastle are ‘about to position themselves’ to sign the player in January, but France Football believe the timing may all be wrong.

With a contract lasting until 2022, it’s stated Reine-Adélaïde could bring in €10-12m next summer, and there’s little reason for the French club to rush things.