Along with O Jogo’s claim that Benfica will happily accept a €20m Newcastle United offer for Andreas Samaris, another Portuguese newspaper take a slant on it.

After English claims of Newcastle being prepared to part with €20m to sign the Greek midfielder, A Bola say it will directly impact another Benfica transfer. Should the Samaris transfer happen, Benfica will then work to sign Danilo Barbosa.

Owned by SC Braga and the Gestifute agency, Danilo has previously been on loan at Benfica and will cost €15m.

That’s why Benfica would be happy with Newcastle’s €20m, because 21 year old Danilo is considered a better long term prospect than 28 year old Samaris. Everton are also credited with a serious interest in Samaris, and it’s stated they’ve offered €16m for the player.

Everton’s involvement, though now claimed repeatedly, is doubtful. The club’s new found wealth, and freedom to spend money, has seen them also linked with a huge money 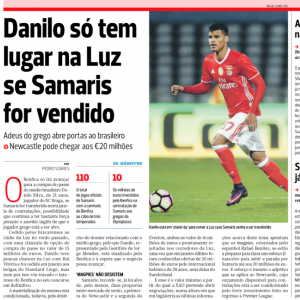 move for Benfica’s Raul Jimenez, which also seemed to be nonsense.

Selling Romelu Lukaku to Manchester United for around €100m will obviously only encourage further rumours of Everton spending.

Newcastle, meanwhile, may want to consider Danilo themselves, rather than helping Benfica rejuvenate their squad.