Before opening Correio da Manhã this morning, it was already claimed elsewhere in Portugal that Newcastle United are interested in two Sporting players. O Jogo said the Magpies want Ruben Semedo, and Record took claims from the British press to report the interest in William Carvalho.

But Correio bring a more exciting story, saying Rafael Benítez’s side would be preparing to make a double offer for the duo.

The newspaper claims the bid should be made in ‘the next few days’ as Newcastle plan to get both players in one go. 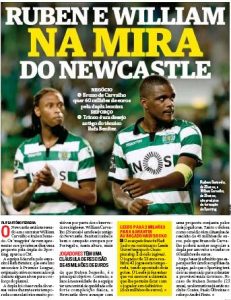 Semedo and Carvalho have a release clause of €45m each, and it’s said that Sporting president Bruno de Carvalho would accept to sell them both for €60m. It’s still not said how much will Newcastle offer.

From what we’ve covered from the Portuguese press in the past few weeks, Sporting are looking to sell these two players, so Newcastle shouldn’t have too much trouble.