There’s a lot going on right now at Newcastle United, and, let’s be honest, the future of Nabil Bentaleb isn’t at the top of the list.

However, there are Wednesday claims from Germany which need to be covered, and there could be a suggestion that the club’s expected new wealth is already travelling ahead of them.

SportBild report that Schalke are very keen to sell Bentaleb this summer, along with teammates Mark Uth and Sebastian Rudy. That’s so they can keep some of their star players, with the hope being their bring in enough money to avoid unwanted sales.

Newcastle have a buying option on Bentaleb of around €10m, and SportBild report the Magpies are ‘considering a firm commitment’ to get the permanent deal done… ‘but possibly not at the amount negotiated’.

That suggests they want a discount, and why not! 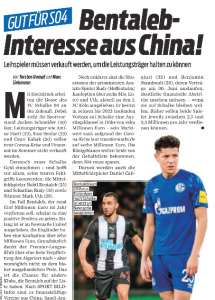 To counter that, SportBild say there are ‘financially strong clubs’ from China, Saudi Arabia and Russia who could provide a good transfer fee and big wages.

There’s every chance this idea, and that’s what it seems, is being used to pressure Newcastle to commit to paying the full option amount. And given everyone knows about the club’s potential takeover, there’s going to be opportunism.