Florian Grillitsch has been one of ‘defining figures’ at TSG Hoffenheim this season, according to SportBild.

The midfielder’s performances have caught the attention of clubs in England and across Europe, with Newcastle United and Southampton getting a mention.

It’s claimed the Magpies and the Saints are ‘already digging’ for the 24-year-old.

The first one is €20m for clubs from lesser leagues and the other is €25m, mainly for rich clubs from the Premier League.

If either of Newcastle or Southampton want to sign the Austria international, they will have to pay €25m to Hoffenheim.

Apart from Steve Bruce’s side and the South Coast club, Arsenal and Inter Milan are also scouting Grillitsch and Tottenham asked about him. 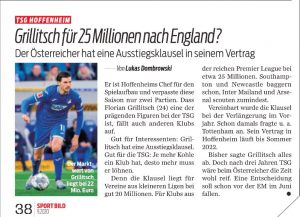 SportBild adds Grillitsch could leave Hoffenheim after spending three seasons with them and a decision on his future could be made before the summer’s European championship.