It’s quite rare for Braga to be on the front page of Portuguese newspapers, unless they’ve done something really relevant.

And they did last night, by beating Brondby 4-1 and qualifying for the next stage of the Europa League playoffs.

The game attracted an interesting list of scouts, which included Premier League sides such as Newcastle United and Southampton.

It’s newspaper O Jogo who reports the presence from the Magpies and the Saints at the game, although they can’t say if there were any special targets for these clubs. 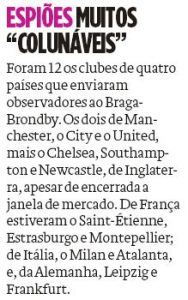 Braga had four different goalscorers, but there were three specific players who had a night to remember: João Palhinha, Wilson Eduardo and André Horta.

None of them have been linked to Newcastle or Southampton before, so let’s wait and see if their good performances will arise any kind of interest.