Premier League side Newcastle United are back following Braga winger Ricardo Horta, according to reports from the Portuguese press this Wednesday.

Newspaper O Jogo is the one with a big story saying the Magpies have once again set their sights at the 25-year-old, who’s been a target since Rafa Benitez was in charge of the club.

Newcastle are said to be struggling with the signing of Ademola Lookman, who’s their first option. RB Leipzig are playing hardball to sell the player now, and they’re looking for the next one on the list.

So according to O Jogo, they’re now going for Horta, and could soon be making a bid of £10m for his signing. 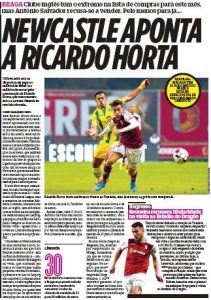 The problem is that it shouldn’t be enough to convince Braga. Club president Antonio Salvador considers the amount to be too far from the player’s release clause, which has been raised from €25m to €30m in Horta’s recent contract renewal.

So unless the Magpies are planning to raise their bid, O Jogo makes it sound like the player isn’t going anywhere. Horta has 13 goals and six assists in 29 appearances for Braga this season.