Newcastle United have been brought into the mix as a possible destination for Paris Saint-Germain star Neymar.

Last summer, the forward signed a new deal, which lasts until 2025. L’Equipe state his situation has deteriorated a year later and Kylian Mbappé has now ‘replaced him’ in the ‘heart’ of the club’s president, Nasser al-Khelaïfi.

The French star would ‘find nothing wrong’ with the 30-year-old’s exit. The latter could pose a problem in Luis Campos’, the club’s future sporting director, plans. Therefore, PSG are open to letting Neymar leave, if they receive an ‘interesting offer’.

When discussing the options for the Brazil international this summer, Newcastle United are tagged.

L’Equipe claim the former Barcelona star is ‘too young’ to go to Major League Soccer. In Europe, the likes of Real Madrid, Manchester United, Manchester City, Liverpool or Bayern Munich are ‘not interested’ in him.

‘Only Newcastle’, backed by Saudi Arabia’s Public Investment Fund, ‘would be likely to welcome’ the South American.

The Tyneside club is ‘not necessarily where the Brazilian wants to land’. In addition to this, Neymar is not looking to leave PSG. His desire is to continue in Paris and to try to regain his best form next season. 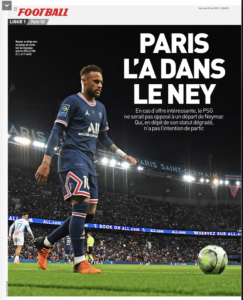 So far, the player has ‘not fully met the expectations’ of the French champions. If the attacker fails to shine, then the ‘tension of the club, in the future, will be even stronger’.

The newspaper has put forward Newcastle United as a possible destination for Neymar, if he were to leave PSG. It needs to be seen whether Eddie Howe’s side, who would ‘welcome him’, can convince the ex-Barca man to leave Parc des Princes.