Making Matt Targett’s loan permanent, Newcastle United started off their summer transfer market with a move few could argue against.

However, that was the easiest of the lot, with Eddie Howe’s side now having to go out into the wild to bolster their squad ahead of next season.

That means looking abroad, where players, while potentially on the move, might not be tempted by a move to Newcastle, which appears to be the case of Nicolo Zaniolo.

The AS Roma star isn’t necessarily out of contract, nor is he fully unhappy in Italy’s capital, but with his deal ending in 2024 and a renewal agreement hard to come by to date, the idea of selling him has crossed the Serie A side’s mind.

This is something Gazzetta dello Sport touch upon this Monday, with it pointed out Zaniolo is aware ‘how the interest of the big clubs in him has not faded at all’. 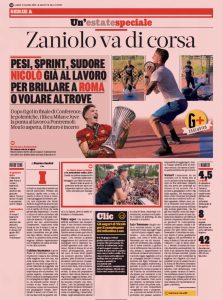 Milan and Juventus in Italy are the ones they allude to, but neither have presented an offer to Roma, who have ‘already made it clear how they are willing to sit down at the negotiating table, but only in front of an offer of at least €50m and without players in return’.

These demands, hard for most Serie A sides to deliver, are ‘precisely the reason why waiting has become the key to everything’ as clubs abroad, with ‘Newcastle and Tottenham above all, don’t have the full liking of the boy, who would prefer to stay in Italy’.

This means the Magpies, if they want Zaniolo, will have to be extra convincing, or simply for the right time to make their offer, because the longer he fails to renew (some new talks are expected by the end of the summer), the more antsy Roma might get and the more frustrated he might become, especially if Milan and Juventus fail to come forwrard.