Unstoppable before the Covid-19 pandemic struck, Ciro Immobile looks a different player altogether on the football pitch these days.

In fact, the whole of Lazio are struggling, losing their last three games and waving goodbye to their hopes of overtaking Juventus at the top of Serie A.

Still, none of this has stopped the rumours surrounding the player’s future, with Newcastle United the recurring club linked with the Serie A top scorer (29 goals in 31 games).

As always when it comes to big names like this one, everything rests on the Magpies’ takeover going through, but big numbers have been circulating of late.

Gazzetta dello Sport on Tuesday explain ‘Newcastle came forward over the past few weeks with an enticing offers: €50m for [Claudio Lotito] and a salary of €8m/year for [Immobile]’, recalling this article they did back in June. 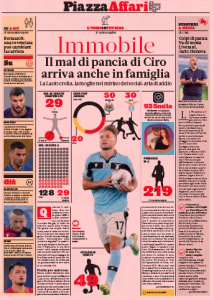 This is then described as a ‘fairytale transfer for a player who has given so much to his current club’.

The newspaper go onto making a case of why Immobile could leave, suggesting that outcome is ‘less and less random’.

His recent ‘melancholic’ and ‘difficult’ outings in a Lazio shirt, paired with the fact his wife is being targeted on social media, ‘risk changing the balance’, already fragile, forcing the Serie A club to potentially let him go.

We’ll see about all this, since there’s always the guarantee of playing in the Champions League next season where he currently is, but at 30 years of age and a career nearing its back end, perhaps the lure of a better wage and a new challenge could tempt him away.