Newcastle United have made a €55m offer for Lazio’s Ciro Immobile in an attempt to secure him ahead of the competition, according to claims from Italy.

Immobile has been in red-hot form this season, scoring 30 goals in 33 games in all competitions, with his tally of 27 league goals the second highest in Europe’s top five leagues.

Naturally, that form has seen him linked with a move around Europe, with several Premier League clubs thought to be keen on his signature.

Newcastle have been named among them on more than one occasion, particularly if their takeover by a Saudi Arabian investment group is finalised.

And according to Gazzetta Dello Sport, they have already made the first move, offering Lazio €55m to secure his signature.

They have also coupled that fee with an €8m per year, five-year deal for the striker and thus a ‘dizzying’ €135m move overall.

That offer is considered ‘really tempting’ but not just because of the money involved. Newcastle have also told Immobile there will be a ‘sumptuous purchase campaign’ this summer with ‘important names’ arriving at the club.

Immobile would be given the task of ‘leading’ this ‘ambitious project’ and it’s this aspect that would excite him the most. 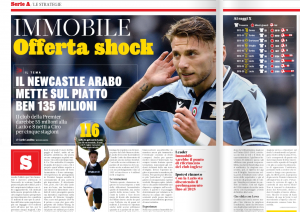 The chance to star in the Premier League would be a ‘crowning achievement’ for the striker, who has rebuilt his reputation after struggling at Borussia Dortmund.

He is, however, very happy at Lazio and wants to continue his ‘fantastic experience’ at the club.

He demonstrated this in January last year when he outright rejected a €60m move to Dalian Yifang, even though they were offering €10m a year in wages.

That was more than Newcastle are offering here, indicating that they may have some convincing, beyond opening their chequebook even further, if they wish to convince the Italian into moving to St James Park this summer.