Nico Otamendi is arguably going through the best stage of his career.

An important player for Pep Guardiola at Manchester City, the Argentine will certainly have played his part when the club are named Premier League champions.

The last time Otamendi was so comfortable within his own form was at Valencia, the club where he was named ‘General’ and became an absolute hero for fans despite his short time there.

Whilst a difficult exit may have left a bad taste for many involved, the Manchester City defender himself doesn’t sound like it’d rule out a transfer for him.

Speaking to Marca, Otamendi was asked about a possible return to Valencia, and told the Spanish newspaper: “Destiny is not written. You never know. I still talk with the guys from Valencia, there were not many left, but with Dani Parejo, with the physios… It’s a city that I liked, the club, I was very comfortable. Who knows.” 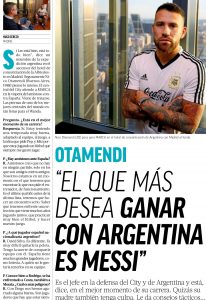 Valencia would find it hard to tempt Otamendi away from Manchester City any time in the near future.

The Premier League club have a more attractive offering both financially and on the pitch, any move would surely be in a couple of years or so, unless the Argentine finds himself edged out of Guardiola’s side.