Tottenham’s efforts to sign Malcom from Bordeaux this summer are getting continued boosts from the club’s current takeover situation.

A week ago we covered claims from France that the Brazilian’s summer transfer, whether it be to Tottenham or elsewhere, is playing a big part in the takeover. Part of the transfer fee would be paid to the selling owners, and given the club is valued at around €50m, it’s playing a big part.

L’Equipe go further on Tuesday and explain more details behind the deal. It’s stated the transfer fee would be split 60/40, and the value is once again put at €40m. 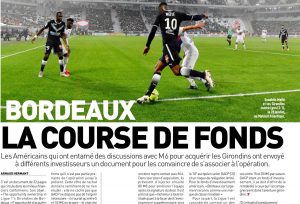 The new owners would give the old owners a guarantee of €24m on the sale of a player, with the expectation being that comes from Malcom.

Earlier this month it was claimed by RMC in France that Mauricio Pochettino has made a personal phone call to the player about a summer transfer, and that Tottenham are ‘favourites’ to make the signing.