Bought by Aston Villa from Dinamo Zagreb back in 2001 for a hefty £6m, Bosko Balaban’s Premier League career was poor, short and ultimately costly for the Midlands club.

Making just nine appearances for the Villains over his two and a half years of being contracted there, the Croatian forward was also sent back to his former club on loan, where he scored 15 goals in 24 appearances.

Eventually, Aston Villa released him from his contract, allowing him to leave Villa Park on a free for Club Brugge, where he stayed until 2007 before returning to Croatia.

Retired from football these days, the 39-year-old hasn’t left the sport altogether, now an agent; a job he discussed with Nord Eclair in Belgium ahead of Anderlecht’s Europa League clash against Dinamo Zagreb. 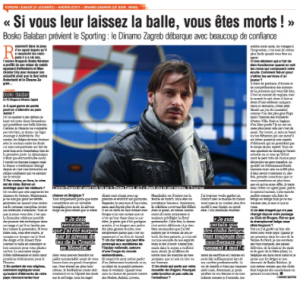 Asked about how he was able to make it in the world of football representatives, he said: “You get players by being patient, listening and understanding the expectations of the person in front of you. It’s a world of sharks, everyone knows it, so you need to have really thick skin.

“In that area, I’m set because I was considered one of the biggest flops in the history of Aston Villa’s transfers. Was it logical for me to be one of them? I don’t think about it anymore, because it’s in the past. However, I use what led to that failure when I’m with players who don’t get the time on the pitch they want”.

Outside of Aston Villa, the striker ended up having a relatively successful career, winning the Belgian first division in 2004-05, and winning the Croatian league on three separate occasions with Dinamo Zagreb.

He also represented his country 35 times, and scored 10 goals. He featured in both 2002 and 2006 Croatia squads for the World Cups, but never came off the bench in either of them.