In their Thursday edition, the Turin newspaper go over Chelsea targeting players in Serie A, and part of the reason for that is the potential loss of Olivier Giroud and Cahill.

Tuttosport states: ‘The Frenchmen speaks with Besiktas, Englishman with United’

Jose Mourinho’s side have been linked with Cahill previously but it didn’t seem especially strong and didn’t go down very well with the club’s supporters.

It would be no surprise if Mourinho is looking to add experience to his squad in the defensive areas, and this week claims came from Sweden that 33 year old Andreas Granqvist is also under consideration by those dealing with transfers at Old Trafford. 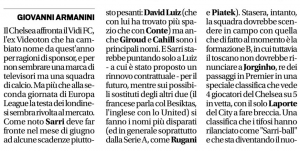 Cahill is 32 years old and very much out of the picture under Maurizio Sarri at Chelsea this season. With his contract ending in June, an exit is very much on the horizon.

Granqvist, Cahill, there’s a couple of days left this week for 37 year old John Terry to be wheeled out again.