Home Championship “He must leave” – Preston North End exit on the cards this...
SHARE

There’s little chance Anders Lindegaard will be staying at preston North End beyond the end of his contract, according to the goalkeeper’s agent. Lindegaard has lost his place at Preston and it’s not the situation he expected to be in when leaving West Brom.

With no league appearances since September, Lindegaard is well aware he’s no longer first choice, and it’s a turn of events which have led to one conclusion.

The player’s agent Michael Stensgaard has been speaking to Danish newspaper BT and told them: “As it looks now, he must leave Preston. We are about to explore what options there are for after the summer. We have a broad perspective on the relationship to find the right thing.”

Lindegaard left Manchester United in 2015 for West Brom, before going on loan to 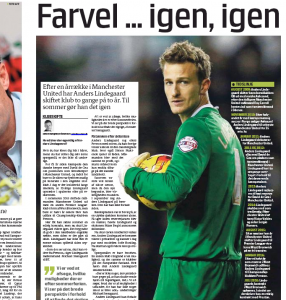 Preston. A permanent deal was then concluded, and it was a chance for Lindegaard to establish himself as a firm No1.

It worked to a degree, with Lindegaard recalled to the Denmark squad, but there’s no chance of international recognition if he’s sitting on Preston’s bench.

With a contract ending in June a parting of the ways probably suits both player and club.