Last week, it was reported in Italy that Arsenal scouts travelled to watch Udinese midfielder Jakub Jankto against Torino.

The Czech international, who had already been linked to other Premier League clubs such as West Brom and Leicester City, has been impressing and catching the local media’s attention.

Jankto has given an interview to Tuttosport, and made some quite interesting claims about his future. As a Turin outlet, Tuttosport were obviously interested in knowing if the player would be keen on moving to Juventus.

Asked where he seems himself next, the player not only said he likes the Premier League, but also claimed how much he liked watching Arsenal when he was a kid: “Juve? As a child I followed Juventus in Italy, not only for Nedved, who remains a myth, but because my father was a Juventus fan.

“We followed foreign football, in England we were fans of Arsenal, and at home Slavia Prague where then I did the whole youth levels. 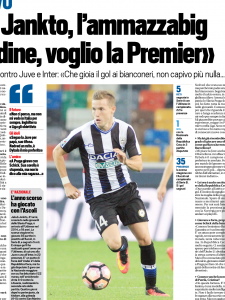 “However, with regard to the long-term future I do not see myself forever in Italy. I’d like to try other experiences, perhaps in the Premier or in La Liga. I am very curious and I have a great desire to learn new things.”

When West Brom were linked, it was claimed that Udinese would only hear the offers starting from €15m. But considering the big clubs who are joining the race, this price should be growing a little in the summer.