Islam Slimani has scored six goals and provided seven assists in 12 Ligue 1 games so far this season, and he’s spent much of the campaign being celebrated.

The Leicester City owned player’s attitude has been praised, with French newspapers wheeling out coaches and teammates from throughout his career to explain what a great person he is.

All that seemed to change when he got a red card against Bordeaux at the end of November, and the situation has progressed so much that he’s now being linked with a move to Aston Villa.

L’Equipe report he’s been showing his frustration in training because he doesn’t feel AS Monaco, now managed by Robert Moreno, have valued him enough.

There’s heavy suggestions of sulking, and Monaco now don’t seem too concerned about the player’s long term future. It potentially feels like a hatchet job, especially given the praise handed out earlier regarding his character. 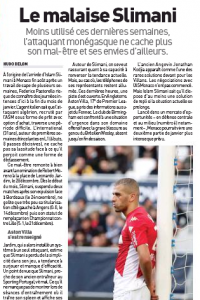 Aston Villa are said to have ‘taken information’ about the player’s situation ‘in recent hours’ and become an option for the player.

It’s not suggested he’s jumping at the chance, but rather keeping it there in case Monaco don’t show him the love he feels his performances have earned.