José Mourinho’s interview with newspaper Record this week is a must read for any Manchester United fan. The eight-page talk, split between Wednesday and Thursday editions of the newspaper, really had a lot of interesting thoughts from the club boss.

One of the subjects addressed in both issues is his assistant manager. In the part that came out on Wednesday, Mourinho was asked about Rui Faria’s departure, and has shown a lot of love for him.

Asked if Rui Faria should take a club like Benfica, who he’s been linked to, Mourinho was pretty straight: “No”.

Asked why, he said: “As a friend, I think he’s prepared for everything – and for those who do not know Rui, I’ll say that he is an example of honesty and knowing how to be. He decided to stay home for a few months but when he gets back to work he doesn’t need to follow the course of most of the Portuguese coaches, and that is to do well in Portugal before leaving.”

Then Mourinho was asked if Faria has could move to a club in Europe’s top competition: “I think so, he has direct entry into the Champions League. He doesn’t need another way.” 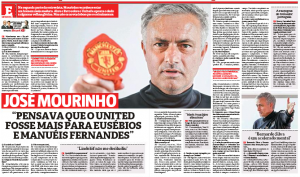 Now in Thursday’s issue, the question was more direct.

Record asked if it’s a Portuguese coach who’s replacing Rui Faria at Manchester United. José Mourinho has given a few hints on who the next assistant is, but claimed that the name still can’t be revealed.

“No. It’s a person coming who worked with me before but I can’t say the name because he’s still linked to another club. Michael Carrick becomes a coach on the pitch but I’m looking for two new people on the team. Good coaches there are many, but I like to make my assistants. I do not like trained coaches, I like to shape them in my way of thinking and they grow with me and I also grow with them.”