Home Premier League “Man, this boy is brilliant” – Revelation impressing everyone, Chelsea is his...
SHARE

Mason Mount came up through the ranks of Chelsea’s youth system, but is yet to make the first team debut. Before the start of the season, the Blues decided to allow him to go out on loan to Vitesse Arnhem.

The attacking midfielder has impressed during his time in the Eredivisie, scoring 14 goals and registering nine assists in 32 league appearances. Mount’s impressive display has seen him receive praise from his teammates and manager at Vitesse.

Vitesse captain Guram Kashia explains how he was wrong about Mount at the start of the season.

“Man, this boy is brilliant. At the beginning of the season I saw him as a little boy with us at the training. I liked him and saw that he was a smart player, but thought he was too young. I never thought he would go that far forward,” Kashia told De Telegraaf.

Over the years, Chelsea have allowed a few of their players join the Dutch club Vitesse Arnhem on loan deals. Some struggled to impress, while others shone during their brief spell in the Eredivisie. 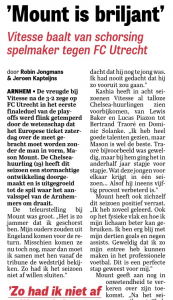 Should they impress at Vitesse, that does not assure them a place back in the Blues’ squad after they return to the parent club. The situation is no different for 19-year-old Mount, whose “goal” is to play for Chelsea’s first team.

“After the season I go to Chelsea and I hear what their plans are. For me everything is still open: another year of Vitesse, returning to Chelsea to go for my chance or renting to another club,” Mount explained.

“Ultimately, it is my goal to play for Chelsea’s first team. That has been the case since I came to Chelsea as a six-year-old.”