On Thursday, we covered an interview with Islam Slimani speaking to the Algerian media, in which he claimed he ‘doesn’t know’ if he’ll be back to Leicester City at the end of the season.

Loaned by the Foxes to AS Monaco until the summer, the striker has been linked to many possibilities for the next transfer window.

His quotes are also covered today by Portuguese newspaper Record, who found them so good that they’ve given him a front page story.

Even though he only said he’d like to return to Sporting ‘one day’, that was enough for Record to highlight his wish of going back to Lisbon. 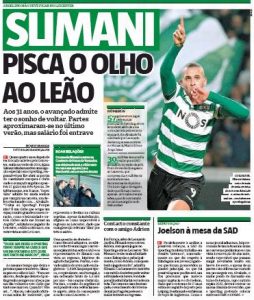 Sporting’s will to sign Slimani back from Leicester City has been reported for years now, and Record writes about the big difficulties today.

They say the player currently makes €2.8 net per year at the Foxes. That would mean a salary of €5.6m gross in Portugal, and there’s no way Sporting could afford that.

That’s why the Lions expect both the player and Leicester City to cooperate and lower their demands in case of a transfer. What Record ignores is that Slimani had a fairly good season at Monaco, and could end up staying in France instead.