A few days ago, a report in Italy suggested Newcastle United had turned their attention to Napoli’s Hirving Lozano and talks had been opened.

Area Napoli were the ones reporting it, and the idea that Steve Bruce’s side, who have already delved into the Serie A transfer market with Valentino Lazaro, could be interested in the Mexican has stuck.

Corriere dello Sport keep the ball rolling on Friday, describing Newcastle as a ‘viable option’ for the winger, seemingly using, once again, Everton’s targets as a starting point for their new look team.

After all, why bother hiring your own director of football when you can indirectly use Marcel Brands?

The Area Napoli report believed a fee of €40m would be needed to secure Lozano’s services, but Corriere dello Sport don’t think that will be enough.

Their own information leads them to believe Napoli would want to start talks at €50m ‘more or less’, which is the amount of money they had originally dedicated to the player when they bought him from PSV Eindhoven (€42m + €8m in bonuses). 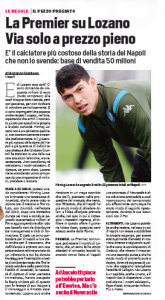 The move hasn’t been a success so far, but Lozano’s talent hasn’t magically disappeared over the course of the season.

They still see him as a good prospect going forward and don’t rule out keeping him, but if they are going to sell him, they’ll want their money back.

Will Newcastle’s new owners be willing to spend that much on a player unproven outside the Eredivisie and making him one of their centre pieces? It seems a tad unlikely, if you ask us.