It is evident that midfield will be one of the key positions Manchester United will look to strengthen in the upcoming transfer window.

Nemanja Matić has already announced his decision to leave Old Trafford after this season. In addition to this, the Red Devils are likely to see Paul Pogba depart as a free agent.

The duo’s exits will leave incoming Manchester United manager Erik ten Hag with limited options in the middle of the pitch.

The Premier League side are being linked to players in the same position and that list includes Lazio star Sergej Milinković-Savić and Barcelona’s Frenkie de Jong.

Claudio Lotito, the Serie A side’s chairman, insisted he will only sell the 27-year-old in the summer on one condition.

“We always talk about money; I always talk about the technical-moral qualities of the players. Milinković-Savić is not for sale, I respect him a lot. Have I ever put him up for sale, is there for sale sign? To buy, you need someone who sells,” Lotito told Rai Sport.

“I respect Milinković-Savić very much, he can make a difference. I have a good relationship with him. If I were asked by a top team in the world, I would ask the player what he wants to do. In my club there is first human value and then the economic one. When I was made an indecent offer of €140m, I decided not to sell him.

“Today there is a problem of respect for men and footballers. If he were to decide that he had the opportunity of a completely different place, which must be at the top of the world, then I would ask myself the problem.”

Tuttosport now state that Lotito is not eager to sell but is aware the ‘market has already been unleashed around’ the Serbia international. As of today, the player’s asking price ‘does not differ from €70m’, even though it is normal for Maurizio Sarri’s side to want more.

Lazio expect offers from the Premier League, where ‘money is not lacking’ and where Manchester United are the ‘most interested’ club in Milinković-Savić. It’s the Red Devils who are easily leading interest from England, mentioned as a contender every day in the Italian media.

Paris Saint-Germain and AC Milan are also keen, if the latter end up getting a new owner. 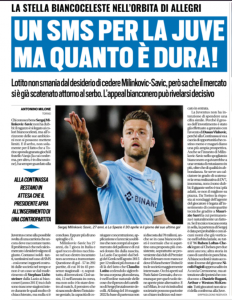 Juventus also have an interest in the midfielder, but they have ‘no intention’ to pay €70m. Their idea is to include some of their own players as part of a deal, to lower the price tag.

The Old Lady are waiting for Lotito to open the door for a player-plus-cash deal to sign the Serbian.

If Manchester United are keen on acquiring Milinković-Savić’s services, they could get ahead of Juventus by making a €70m offer to Lazio.