With Reading being linked to the 23-year-old, there’s now both positive and negative news regarding the chances of the Royals getting him.

Newspaper O Jogo is the most optimistic. They say Reading are ‘waiting for authorisation’ from the FA so they can finalise a loan deal.

It’s not made clear why the Royals would need this approval, or whether it’s a routine step, just that the Championship side are ‘waiting’. 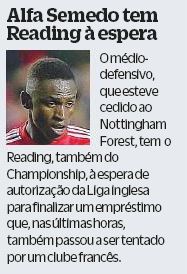 However, Record bring another version, claiming Semedo should actually move to the French league.

They say there were two Championship sides interested in his signing, which were Preston North End and Reading. Record believe neither of these clubs could find a deal with Benfica.

He has a contract with his current club lasting until June 2023. Now it’s just a matter of time to wait and see where the player ends up, and the structure of the deal.