Publishing an excerpt on their website of a huge feature on Antoine Griezmann from their monthly magazine, So Foot got Manchester United fans very excited on Monday morning.

Talking to Sébastien Bellencontre, labelled as the French forward’s ‘image advisor’, the French magazine discussed the player’s rise over the past couple of years or so, going from ‘talented Atlético Madrid signing’ to ‘worldwide superstar’.

The 25-year-old is one of the most sought after players on and off the pitch, and the ideal plan would be to create something of a hybrid between ‘David Beckham and Zinedine Zidane’.

Why? Bellencontre explains: “Beckham because he’s [Griezmann’s] idol, but also because I want to make him a fashion icon that goes beyond his football career. Zidane for the French DNA, simplicity, family values, and loyalty too. We want Antoine to finish his career with Puma, for example.”

Lauding the former Manchester United number seven whenever he gets the chance, there’s little doubt Memphis Depay’s transfer, leaving the iconic shirt vacant, will have gone unnoticed by the Atlético Madrid star.

He adds: “When I read articles about a hypothetical transfer to Manchester United, I’ve got to say it would be the ideal scenario marketing wise. He would play in Beckham’s club, his idol, with the same number seven on his back.”

While this is all well and good, there are a few things standing in the way of Bellencontre’s dream. 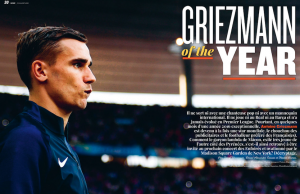 One of them, it appears, is the fact that, as far as the article’s information goes, his contract as Griezmann’s ‘image advisor’ ran out in December 2016 (although, that might have been renewed).

Secondly, the French forward doesn’t actually have an agent, with former Real Sociedad scout and very good friend of his Eric Olhats advising him on a day to day basis for free.

In fact, Olhats was very quick to dismiss any talk of a move to Manchester United a few lines down, stating: “The football aspect of things will be a complete priority. If there is a departure, it will be due to where he plays on the pitch, to the players around him.

So, while this doesn’t dispel a transfer to José Mourinho’s side, it seems everything will need to be perfect for Bellencontre’s dream of seeing Griezmann in Manchester United’s shirt to come true.

The first hurdle remains convincing Atlético Madrid to sell their star, and that won’t be easy, or cheap.